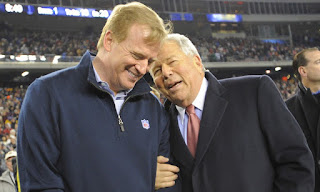 It is time for all New England Patriots fans to put aside their ridiculous hatred of NFL commissioner Roger Goodell.

Since the 2014 AFC Championship game against the Indianapolis Colts when the entire “deflategate” saga began, New England Patriots fans and the local media have made Roger Goodell “Public Enemy Number One” throughout New England.

Whether it has been ESPN and Sports Illustrated providing the information, it is clear that many NFL league owners have pressured Goodell into severely punishing the Patriots as a make up for not punishing them severely enough for the so-called Spygate incident.

Although the Patriots have lost two first-round draft picks in punishment for these so-called cheating scandals, these penalties imposed upon them by the other 31 owners  has done little to slow the success of the team for the past decade-and-a-half.

Should Patriots fans be upset about the investigation be handed to someone who allegedly walked up to a Patriots employee during the AFC Championship game against the Colts and basically betrayed his bias against New England? Sure.


Mike Kensil, the NFL’s VP of game operations, walked up to Patriots equipment manager Dave Schoenfeld on the sideline after halftime and said, ‘We weighed the balls. You are in big f—— trouble,’ ” SI’s Greg Bedard wrote last May. “New England and Kraft thought this incident, and others, showed bias by the league and would be explored in the Wells report.”


Turning on Goodell, however, the Patriots’ fans and media’s anger towards a figurehead just seems as if it severely misplaced.

Roger Goodell does his job well as NFL commissioner. There is no doubt about it. His job is to carry out the will of the majority of the 32 NFL owners--nothing more nothing less. The number one rule is to make them a ton of money and he has done that during his tenure.

I truly believe that he considers himself a close personal friend of Patriots owner Robert Kraft and his son Jonathan Kraft. I believe the Krafts when they have indicated repeatedly that Roger Goodell is doing a good job for the NFL.

Goodell has the money keeps flowing to the owners. He has been a figurehead and public protector of the 32 owners he reports to. He has done that.

During the entire two years of malarky about footballs losing air pressure in the cold (a lesson I learned living in Southeast Massachusetts and leaving my football outside in late fall as an eight-year old but the NFL was strangely unaware of after 80 or so years of operation), it was clear the NFL wanted to punish New England.

The always plugged in Mike Florio of ProFootballTalk indicated at one point “NFL Commissioner Roger Goodell is being pushed by a small handful of influential owners to hold firm on the four-game suspension.”

Anyone want to guess who is the MOST INFLUENTIAL owner in the NFL? The NFL franchise owners who wield the most power behind the scenes? Who regularly wields Roger Goodell like a marionette?

Anyone with any knowledge of how the NFL operates knows that the Rooney family has owned the Pittsburgh Steelers for generations and been the power-brokers of the NFL. Which franchise is threatening their record of dominance and Super Bowl wins? Who has consistently defeated them in the past decade and a half?

Like the Mara family in New York running the Giants for generations, the Rooneys are among the most powerful owners in the NFL. Patriots fans, if you want to direct your anger at who was really behind deflategate, direct it at the Steelers ownership group (and the other 30 owners who failed to stop this farce).

One of the biggest miscalculations early in the process by New England owner Robert Kraft was that he totally did not anticipate the total and complete lack of support by his fellow NFL owners. He expected a fair and reasonable investigation and got a witch hunt orchestrated by a powerful group of jealous billionaires.

Of course, Kraft’s lack of support for his fellow owners who had been in the same situation simply came back to bite him in the rear-end.

Kraft was nowhere to be found supporting his fellow ownership group in New Orleans when a witch hunt investigation for the so-called “bountygate” resulted in massive suspensions, fines and discipline for the team coaches and players.

Where was Kraft with the support for his fellow owner of the Miami Dolphins during the Richie Incognito “bullygate” scandal? Kraft was standing in support with the rest of the jealous owners ganging-up on that franchise rather than actually having a legitimate investigation before any punishment.

That scandal decimated the Miami Dolphins it almost ruined the career of Richie Incognito and the other 31 owners of the NFL stood to the side and snickered and laughed with glee while that proud franchise was dragged through the mud and punished for an incident that the NFL could not prove even took place.

So why did Kraft--when he was the one facing discipline--expect the other owners to rally in support behind him? They were simply doing what they continuously had done along with Kraft ganging up on other owners in their little club of 32.

When the league owners turned against Robert Kraft those owners used their marionette Roger Goodell as their public face to carry out the discipline. Just as Kraft was complicit with the other scandals with these other NFL owners, the Rooney family, the Mara family, the Hunt family, and  all these other powerful and proud franchises clearly wanted to take Kraft and his arrogant franchise down for having the audacity to have a winning team for almost two decades straight.

The Patriots as a franchise from the ownership down should have been aware of what was actually going on--and should have handled themselves with less indignation and more cooperation--and attacked the allegations head-on from day one. The thought of Robert Kraft expecting his fellow owners to stand behind him was a ridiculous and naive idea in retrospect.

New England fans need to get rid of this misplaced anger at Goodell. Continuing to throw shade on Goodell only shows that the manipulation of you by the other powerful NFL owners is working. You are the fool. Don’t be manipulated. Don’t be the fool.

Getting angry at Roger Goodell for his statements and actions during deflategate is like getting angry at Kermit the Frog rather than the person moving him and speaking with his hand up the puppet’s rear-end.

Roger Goodell is the puppet. He is the shield for the shield of the NFL. Patriots fans need to direct their anger at the other owners. Show that you are not an easily manipulated tool.