on September 02, 2019
So in preparation of my upcoming podcast at SportsKrunch.com, I used the NFL Playoff Predictor (which I heartily recommend, and can be found at https://playoffpredictors.com/) to predict each and every game of the NFL season.

Some surprises: the Ravens struggle vs the AFC North and miss the playoffs; 3 teams at 9-7 in the AFC South with Houston winning the tie-breaker; would have thought Buffalo is an eight win season; Chiefs and Chargers tie again with KC winning the tie-breaker; Cowboys and Eagles battle all season; three NFC teams win ten games and miss the playoffs; I like Atlanta; I like Seattle even more than I realize; and there is no lock for the basement and top pick in the NFL Draft.

Generated By The NFL Playoff Predictor

Yeah, I'm picking the Patriots--why not? The team is deep, could be special on defense, and is the smartest team in the NFL. I so desperately want to see Drew Brees and Tom Brady in the Super Bowl--the two elder statesmen at quarterback. How great would that be? 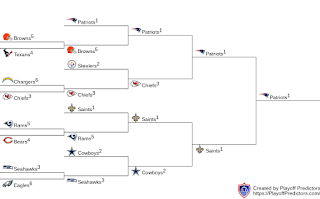