Also, I was on the "Locked On Patriots" Podcast this week to talk with host Mike D'Abate about the two mock drafts and how to try and get in the head of Bill Belichick and try to try to predict what the Patriots will do next week in the NFL Draft.

In the course of mocking, I ran hundreds of mock drafts (I'm a sick man) trying different strategies and seeing different trends.

Figured that I should post a few here just because someone may be interested in seeing some recent mocks that weren't published:

I couldn't get Kellen Mond so I doubled-up on Mills and Trask with the hope that one emerges. Trading down to 33 to get Zaven Collins would be great. This mock had the PFN generating giving Mac Jones to SF at #3 and Justin Fields going #4 to Atlanta. Trey Lance went to Detroit at #7 and I thought DeVonta Smith would drop to #15 but he went one pick prior. With the top 5 QBs off the board and the big 3 wide receivers and Kyle Pitts, it was trade down time.
Three wide receivers, three cornerbacks and two QBs was a little excessive, but still got two quality CBs and offensive and defensive line help to go along with Collins.

This is a dream draft. Trade back, get an impactful and athletic LB like Jamin Davis and grab slot WR Kadarius Toney in round two (I think he's gone by 25 in the first round). Still get Kellen Mond at QB and double up at wide receiver and on the offensive line. I was stuck on RB Jaret Patterson--not sure that he can contribute at the NFL level, but he was so dominant against inferior competition, it's fun to see what will happen.

Added some good future picks here for 2022 and still got studs at LB, CB (or safety, Melifonwu could be a Devin McCourty replacement) and Elijah Moore with the last pick of round two (not sure how he drops there but no problem). Tier Two quarterbacks flew off the board in that gap between 71 and 122--this was a draft to mark as a learning experience,

This one was fun--I've targeted Kellen Mond as the QB for the Patriots, but Trask was sitting there and I thought, "wouldn't that just be Belichick, grab two QBs!". Three offensive tackles is a bit much, but Forsythe could be a guard at the NFL level so it wasn't too much of a reach.  I liked the bookmark wide receivers. Again, trying to get as many chances in that 50 to 150 range. 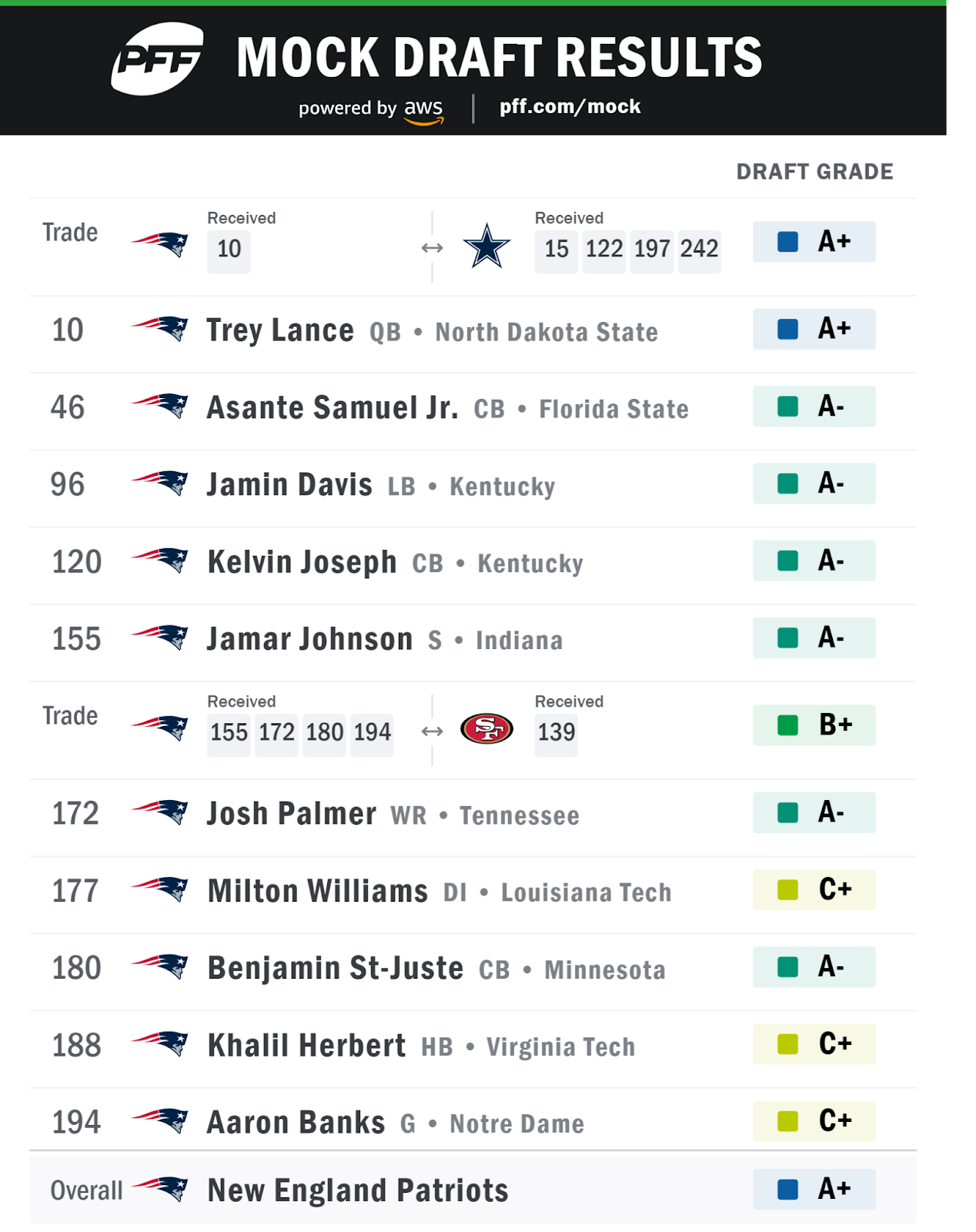 Switched to the PFF mock draft machine to mix it up a little. Trade up for Trey Lance at #10? Nothing wrong with that. Jamin Davis at 96? Seems so unlikely. Waiting until #172 for a wide receiver probably was not smart. A ton of talent for the secondary, though.

Trey Lance dropping to #15? That's insane. Only grabbed one WR, but once I drafted Lance I was in a coma of happiness.  Two cornerbacks, two linebackers and defensive tackle at least should help on defense. I really liked grabbing Kylin Hill at 177. Hurt himself battling with new head coach Mike Leach and ending up only playing three games, but he is the perfect third-down back to develop behind James White as he has excellent receiving skills.

Again, traded back multiple times and still got Collins at #32. Mond at #64 seems high, but all three second tier quarterbacks were in the 80s/90s two weeks ago and now are going in the 50s/60s. Three wide receivers is a bit excessive, but with Edelman gone, Harry possibly a draft day trade, it could be feasible.

Deonte Brown at 105. He's a beast. No way he should be there beyond the second round. I seem to be gravitating to Stokes and Taylor at CB. They're good size and man-press guys. Neither has shown great ball skills/interceptions, so that is what is dropping them down.

I think I broke the PFF Draft Trade algorithm. 8 different trade downs to get from 15 to 31. What a joke! That said, I love the results. Picking up a 5th, five 6ths, and seven 7th round picks is insane. What the heck would anyone do with all those late round picks?

Had to take a trade-back break after the madness of the PFF mock draft. Still snagged a bunch of future draft picks, but still ended up with 10 picks, all in the 50 to 150 zone. Three slot receivers! This was a fun one.

Bateman is a stud wide receiver. Davis I talk about in Mock 3.0 at FullPressCoverage--he's a day one starter. Stokes again, I can't help myself. Had to trade back up to get Mond, but I got him. Love Chazz Surratt and Monty Rice. Both are smaller linebackers than Belichick likes, but I like the idea of a little more speed.
Mock Draft New England Patriots NFL NFL Draft